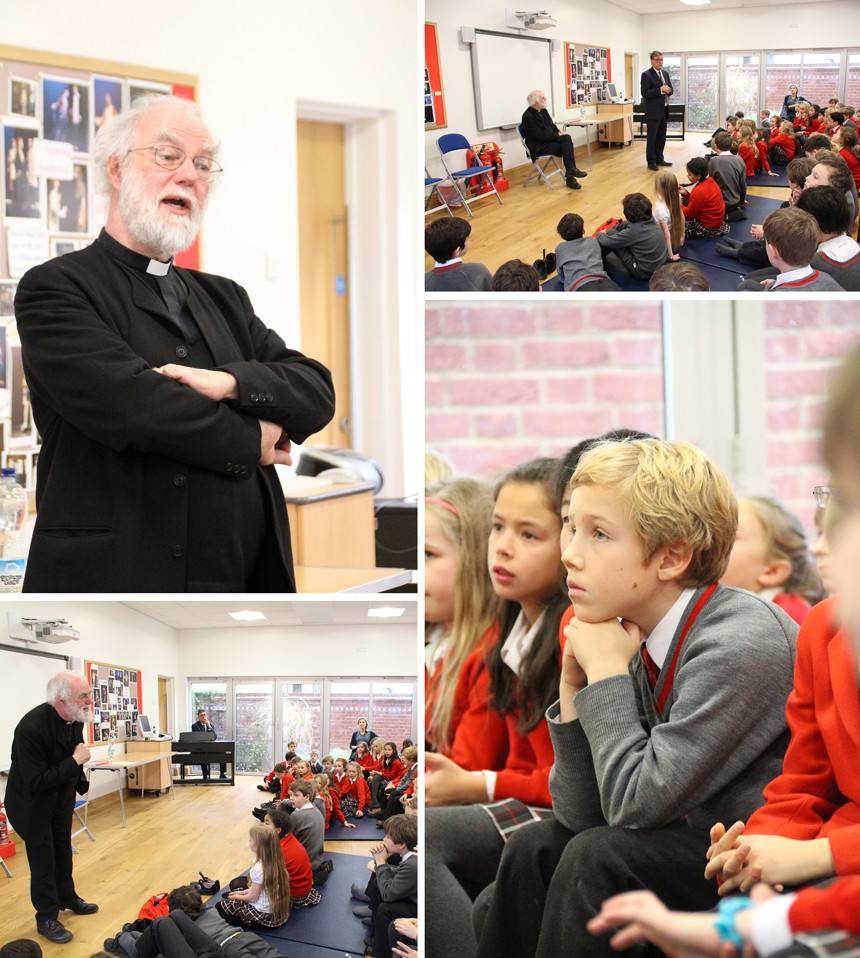 On 14 January 2016, St John’s was delighted to welcome former Archbishop of Canterbury, Master of Magdalene College, Lord Rowan Williams. Lord Williams visited the school as part of the Third Form’s ‘Wonder Afternoons’, comprising of a series of prominent speakers.

Lord Williams spoke eloquently with an audience of Third and Sixth Form pupils and staff and focused on the attributes of a good citizen, arguing that these replicated the virtues of a good person and that thinking about good personhood was central to all education.  The former Archbishop of Canterbury patiently answered the varied and thoughtful audience questions which included: the challenge to all world faith leaders on major issues; how he coped personally with seeing horrific effects of violence; war; keeping faithful after enduring man's inhumanity to man.

The children were eager to know about Lord Williams’ interactions with the Queen and to find out 'What is the Queen really like?' He explained that she is very shrewd and has a great understanding of world issues and has a fun sense of humour. Dr Williams also enthralled the children when he spoke about officiating at the wedding of the Duke and Duchess of Cambridge.

On a more serious note, Lord Williams spoke of his time with Robert Mugabe in Zimbabwe during which he urged the leader to call a halt to his ‘campaign of terror’ which has seen thousands of the country’s Anglicans forced out of their churches. One of the Third Form children explained, “I was amazed to hear about the time when the leader of the Soloman Islands asked Lord Williams to be forgiven for his part in their war and it had to be carried out on the football pitch.”

Mr Michael Andrews, who organised the event, said, "Despite having held such high office and his long career as an academic, Dr Williams was completely at home having lunch with the children and enjoying their conversation. Some children gave him a tour of the school and he chatted with them about his own school days. His talk was fascinating and his willingness to spend so much time listening and responding to the children's questions, combined with his gentle, approachable manner made the visit a huge success."