Over 45 St John’s parents and visitors form other schools attended our Emotions for Learning (E4L) Morning in Byron House.  Parents watched aspects of the E4L curriculum and Mindfulness programme in action during the day, experiencing it with the children, as well as listening to key presentations from staff. As an extension of the E4L curriculum, Form 2V gave a Tai Chi demonstration, alongside their teachers from Cambridge Kung Fu. Tai Chi is part of the 'My Mind' curriculum for this year group which encompasses: 'Paws.b' Mindfulness, Tai Chi, Philosophy and Outreach projects.

E4L was developed at St John’s with the help of the school’s former Child Psychotherapist who set out to create a 4-year social and emotional curriculum for our youngest children, based on up-to-date research about how children’s minds and brains develop. It is designed to encourage the children to express their opinions and feelings and give them the knowledge, skills and understanding they will need to be able to think creatively and problem solve effectively in all areas of their lives.  Mindfulness teaching at St John’s builds upon the foundations laid by the E4L curriculum.  The programme of lessons seeks to help the children to train their minds to have present moment awareness as well as developing helpful strategies for improving self-awareness, calm and learning. 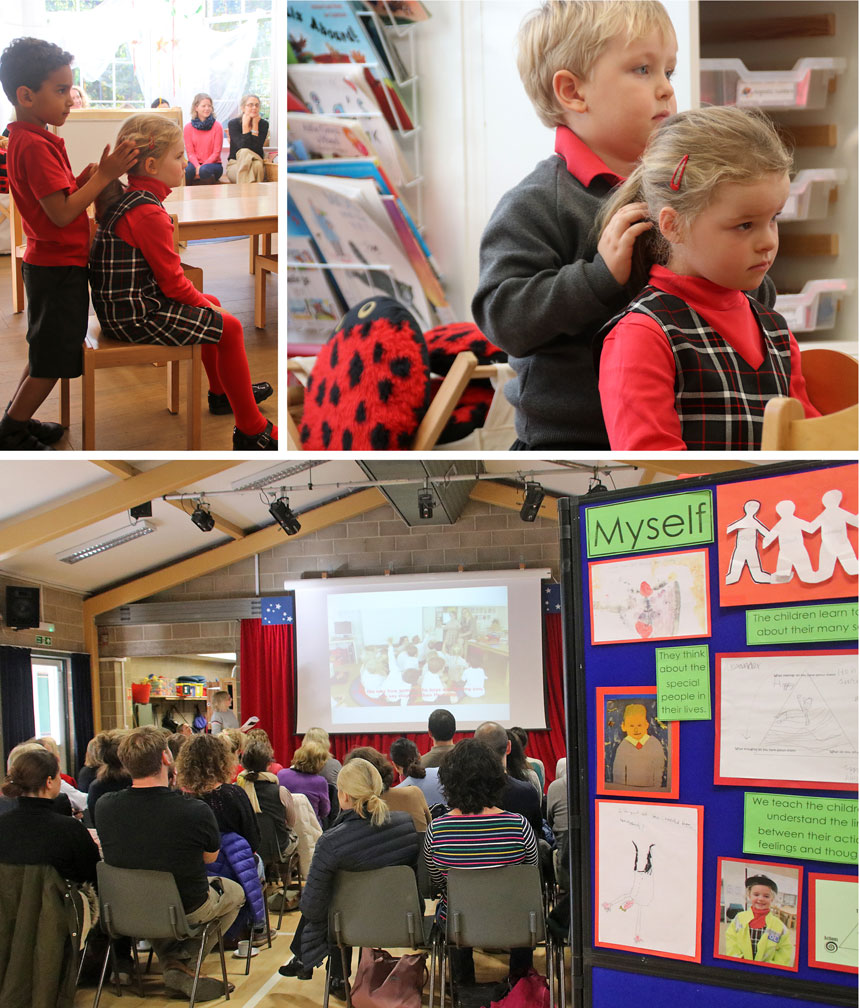 The T2 classes started the morning with a demonstration of ‘Action Story’; peer-to-peer massage which follows the ‘Massage in Schools’ programme. The children demonstrated asking their partner if they could touch them and then confidently performed the series of 15 strokes designed to nurture and promote positive touch. Following this, the presentation explained the story and the theory behind E4L and also how E4L is experienced through the day by the children. Examples were given of how times to ‘just be’ are built into the children’s day through ‘Stillings’ and Mindfulness practices. The E4L way of communicating was described as well as the five units of E4L lessons. Display boards around the hall showed examples of children’s work from E4L lessons and a table full of E4L books were available for parents to investigate during the break. 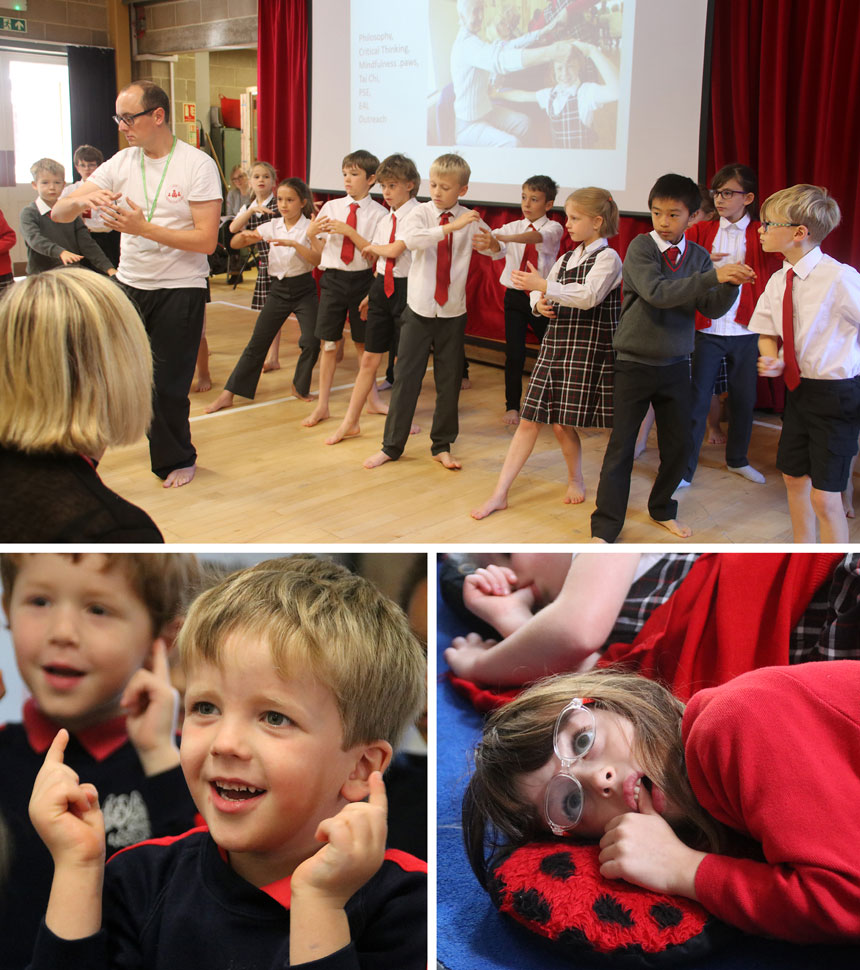 The parents visited their child’s classroom and experienced part of an E4L lesson. Some of the subjects observed were using the ‘three bears’ to learn about linking thoughts, actions and feelings and thinking about ways in which your mind is like an animal, as part of their Mindfulness Unit. The parents were led through a Mindfulness Practice by some Form 1 and 2 children, with the children demonstrating one of their favourite practices, Finger Breathing, and inviting their parents to join in. There was a strong silence in the hall as everyone took time to ‘just be’ together. One parent thanked staff and pupils by commenting, "It was really inspiring to hear how much thought has gone into integrating mental health awareness into all the different strands of teaching throughout the school and it is so reassuring to know that this approach is not a bolt on. It really hit home where you said we don’t teach in a way that increases stress and then show them how to meditate to get rid of it but instead that the school is trying to think mindfully about everything that happens to the children, as well as giving them to tools to cope with the ups and downs that life will inevitably throw at them”. 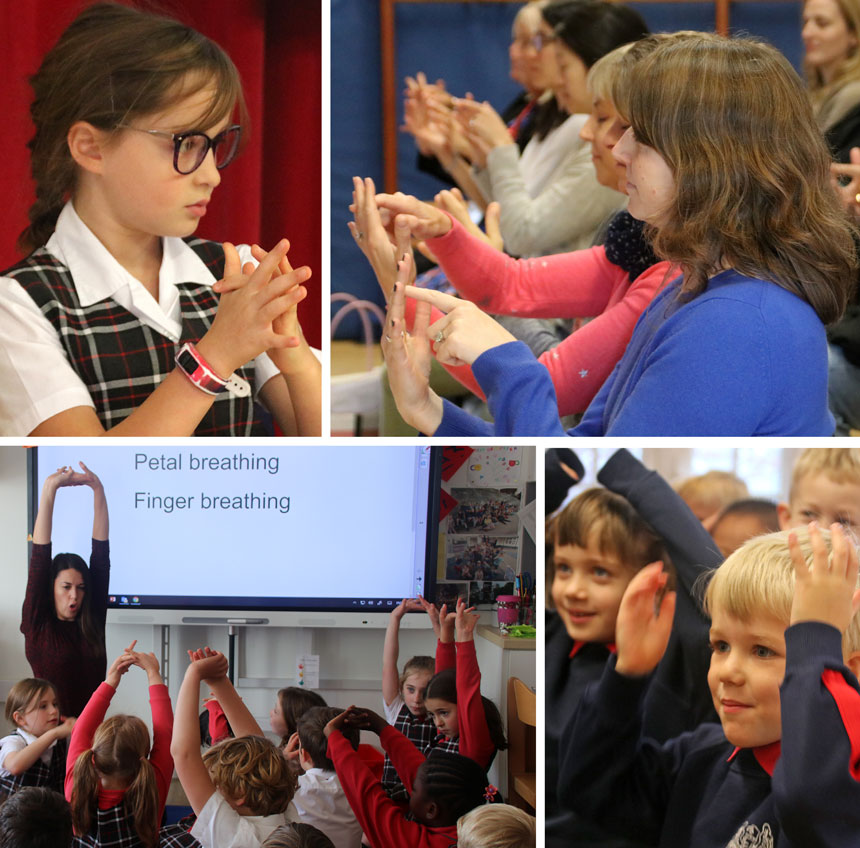