At the eleventh hour of the eleventh day of the eleventh month St John’s fell silent to remember those who have given their lives in conflict and the centenary of the start of the First World War. A commemorative service was held in Hinsley Hall which incorporated the Remembrance-themed pieces Senior House children had produced.  £166 was raised for the British Legion’s ‘Poppy Appeal’ and £262 was raised for the ‘Help for Heroes’ charity. 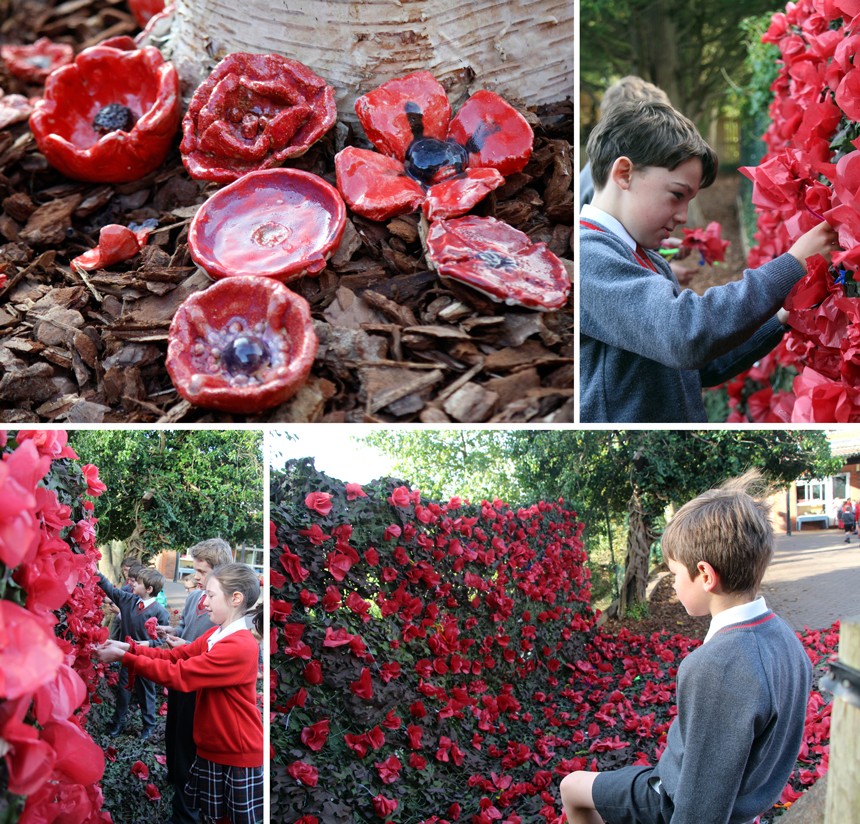 Every child at Byron House made armfuls of red poppies to create a waterfall of red flowing down the fence and across the floor in the playground. Many then took the time to stand mindfully and take a moment to remember. Following an Assembly on the work of ‘Help for Heroes’, the children brought in coins and made as many lines of 100 coins as they could. Commenting on the sea of poppies one child remarked, “I looked at the hundreds of poppies we all made and thought about how each one represents a soldier who has fallen.”

At Senior House the children embarked upon Remembrance-themed projects in a range of subjects in the first half of term. In English, the Sixth From incorporated the war poems of Brooke and Owen, as well as the lesser known works by Philip Larkin, Christina Rossetti, Gillian Clarke and Carol Ann Duffy. The children wrote their own responses on the theme of memory and remembrance, dealing with a variety of events which trigger lasting memories, both collective and personal.  The children also experimented with the Wordle app to create artistic 'word clouds' of their own poems. The Fifth Form worked on an enterprise project in DT and designed and manufactured commemorative key rings using our new laser cutter. Banksy-style street art popped up on brick walls around the school as the Sixth Form used stencils to create remembrance graffiti images.

As a Maths-based project, the children produced 2D masks and studied the proportions of the face and used ideas linking to Remembrance Day, such as the colours of battle, tears of sorrow and the colours of camouflage, fire and the setting of the sun. In Art, abstract pieces took in a wide range of concepts from the destruction of landscapes to doves of peace, poppies, memorial stones, uniforms and the damage and decay of war. The children studied artists Anselm Kiefer, Paul Nash, Edward Bawden and Don McCullin before creating their haunting war pieces, as well as life-size mod-roc sculptures of a cluster of people based on Henry Moore’s piece, Humanity.  You can view a selection of the artwork in this gallery: 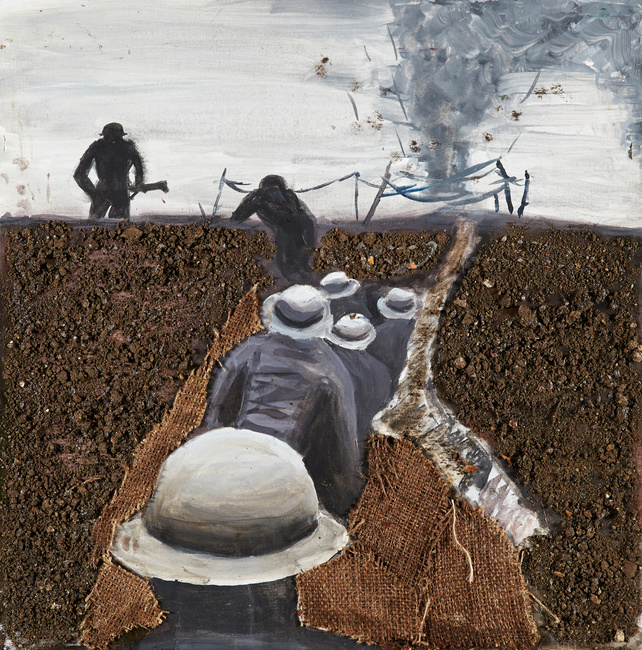 In Music the children listened to pieces such as Barber’s Adagio for Strings, John Williams’ Fanfare for the Common Man, Avo Part’s Fratres and Clean Bandit’s  Birch. They recorded their own compositions, using the results of an improvisation exercise based on dissonant intervals, creating their own lyrics inspired by remembrance poetry.


I was just fields and I was able to be free.
To express my feelings in my grass and flowers.

Then bodies lay all over me
And I was unable to feel myself.
I felt the suffering on both sides
And grew quite close to the soldiers as they read their letters aloud.

I am proud of my history,
But guilt surrounds me like a dark cloud
And it cannot be shaken off.
Guilt because all I did was watch them die
With tears in my eyes
And did not offer a hand to help.


I stand alone, watching helplessly as the men fall to their knees.
Their faces are tilted towards the sombre grey sky, peppered with wretched ash
The foreboding signs are wheeled out, painted mustard and ebony.
Ghostly fingers reach down their throats and take hold,
Throwing them to the ground without a last breath.
The men stagger around in radiation suits, their helmets doing nothing to help.
Their arms are over each other’s shoulders, stumbling away. One falls down.
He can’t get up. He won’t get up. He will never walk again.
The others try to drag him up, pull him along, but he shakes his head.
His eyes are full of tears, sparkling like a sky full of stars,
He blinks once, twice… The next time he opens his eyes, they stay open.
They shine with an unnatural gleam. They drop him. He is gone.
The little group leaves, more people dying around them, fleeing.
No matter how far they run, they are contaminated now.
Nobody will want them. Who would want goods spoiled by poison?
Tears prick my eyes, but I stand still.
One of them calls for me, crying, pleading, howling.
I turn my head, unable to look them in the eyes. They scream again, begging.
I walk away, unable to watch anymore. I can do nothing more. I stand alone.


I remember the sad birds’ song
The bitter, biting wind
Battering the tinted Georgian windows.
The low crackle of the fire engulfing the crippled logs
Sparks spitting from the charred fireplace
Your dusty garden hat hangs for the oak mantelpiece
Your coat sits on your favourite chair
With your cushion waiting
For your muddy gardened trousers to sink into it.
I remember those muddy trenches.
The stinking smell of no-man’s land
I stood next to you
I watched you in pain
I heard the call and picked you up
Carried you home
I remember waiting by you
But you didn’t wake up.
The daylilies still lie on the marble.